It has almost been a year since I have blogged and just over one year since we have moved into this house which means a lot of changes.  One notable change is the addition of our little man, Nolan Archer.  We welcomed him March 10, 2014 weighing in at 9lbs 9oz! It was a long, rough and cold pregnant winter. In the end it was all worth it for the most amazing home birth of our son. It was truly one of the best experiences of my life to have our midwives assist in a water birth in our own bath tub and just to have their support throughout and after my pregnancy. 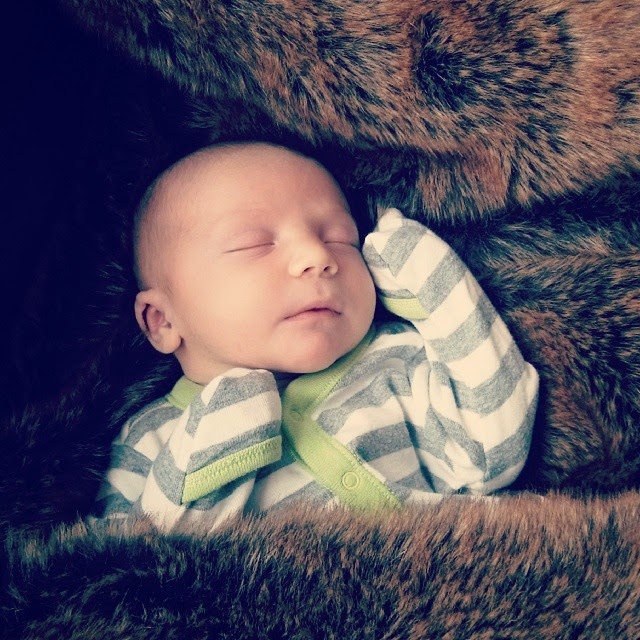 We can't forget about Penny! She is two in less than a month and is one independent, caring, talkative and energetic munchkin.  She loves her baby brother so much that most of my day is spent protecting him from her hugs and kisses aka baby mauling. 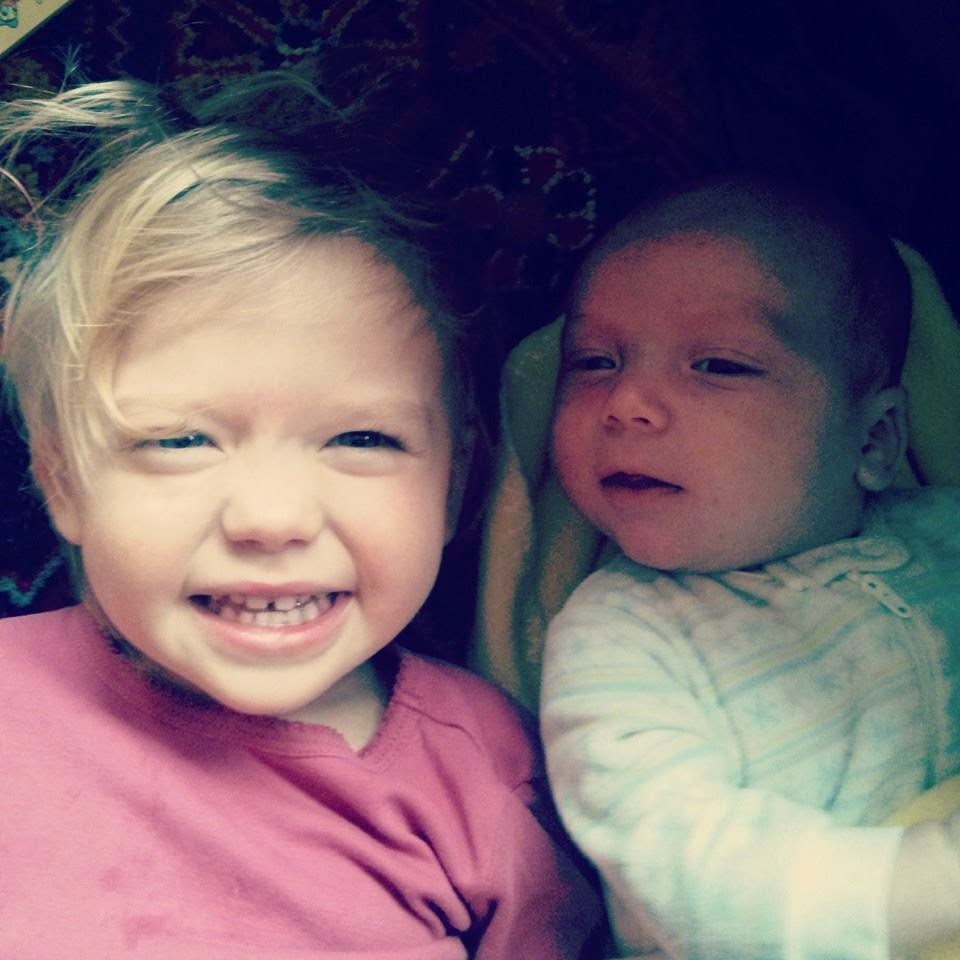 We do have some sad news too.....we have lost both our beloved pets, Stryker and Bella. 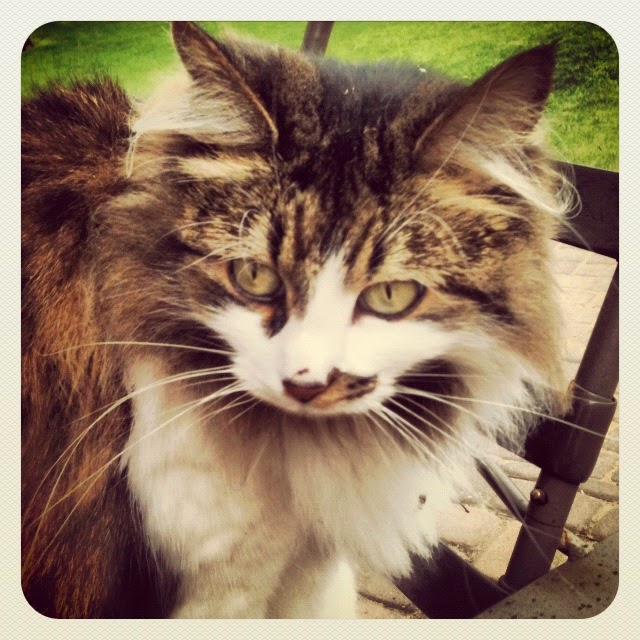 Bella disappeared in the fall.  She went outside one night and never came back.  We are guessing it was a coyote but Mr.Loonie likes to think it was the great horned owl who lives down here. 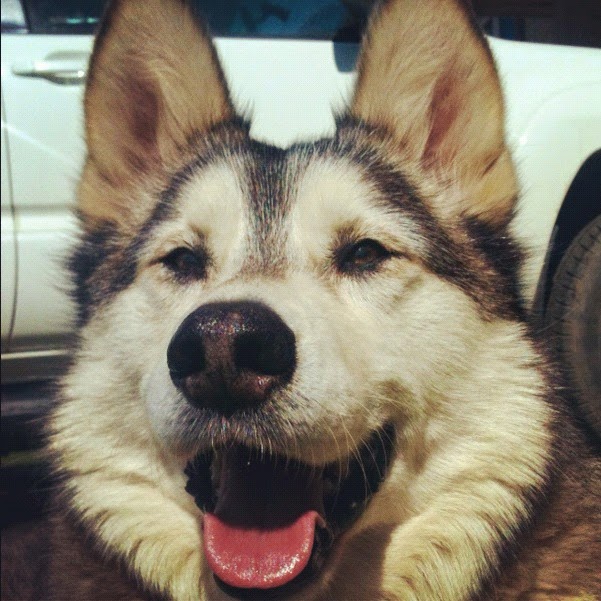 As for Stryker, our big silly guy, we lost him this past April to the North Saskatchewan River.  During his daily walk he decided to chase some canadian geese out to the river's melting ice edge and slipped off. The current was just too much for him and was swept away.  It was a hard couple weeks but we like to think that he left us being his wild self and not aging in pain.  He was 13 years old and suffering with arthritis and starting to pee in the house. This summer has not been the same without him, we really miss walking and camping with him. 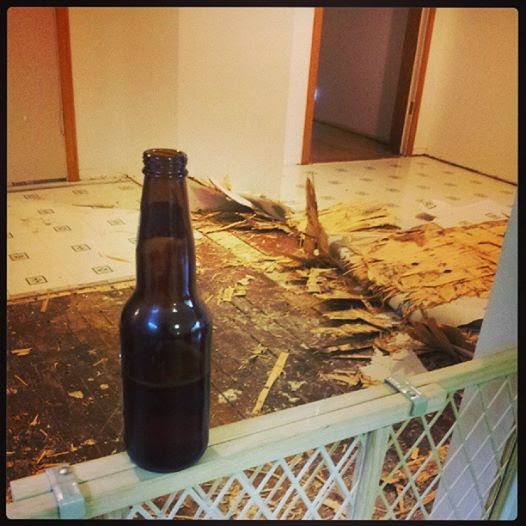 As for the house, we got quite a bit accomplished despite being pregnant and a toddler running around.  I will be backtracking from the beginning to update our progress up to now with random posts in between.

White Out: Entry and Hall Edition

Remember I mentioned I was planning on whiting out the new house....well we are on our way.  After testing 4 whites that I randomly chose from the CIL white pamphlet at Home Depot I settled on Artesian White a whole 20L pail of it.  To test,  I painted a square block in the main room, hallway, mudroom and entry for more than week to see how each white looked in every light situation.  Picking a white is frekin difficult, it could be too pink, yellow, blue and beige. I found Artesian white to be the purest white with a slight creaminess to it. We splurged on CIL Premium paint and I'm glad we did, it only took 2 coats to cover a medium beige and it went on super smooth. 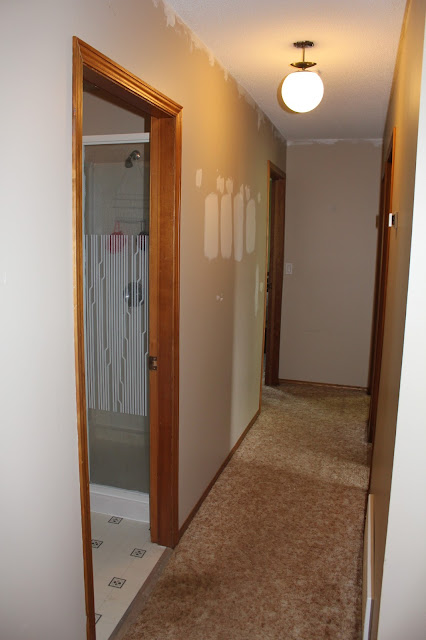 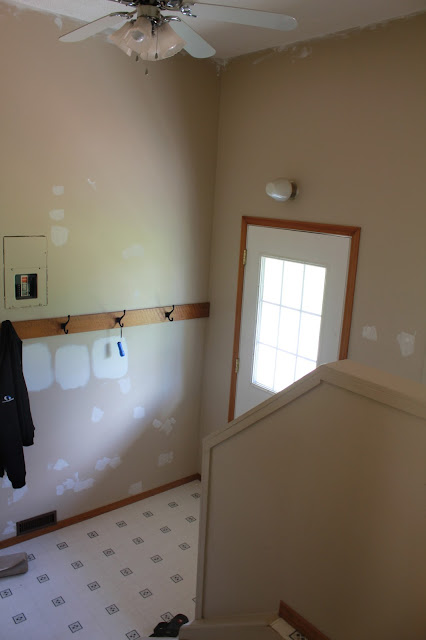 Check out the afters, I am super pleased with the results!  So much more to do though! We need to change out the flooring in the entry, I am thinking a brick tile. I know that may sound crazy but I have seen some awesome pictures and it camouflages dirt so mopping is not required EVERY day. I also bought two IKEA Hemnes shoe cabinets to be installed against the longer wall. Notice anything else? The front door is now black! The plan is to also do the hall doors black but I am waiting to find five matching 5 panel doors from Habitat for Humanity Restore to replace the existing hollow core wood panel doors.

As for the rest....trim, art, rugs and a little bit of styling will complete the spaces.  Don't the pendants look great too?! 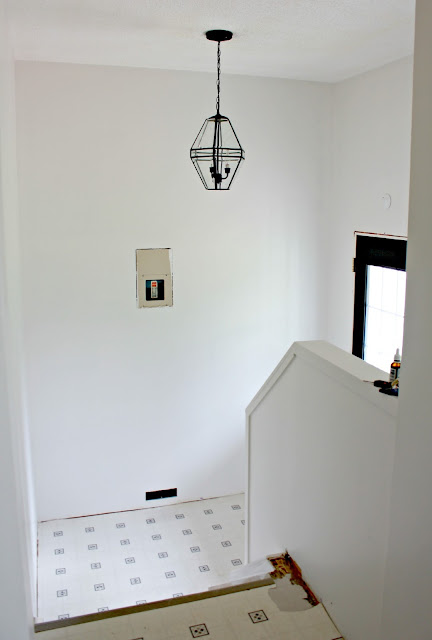 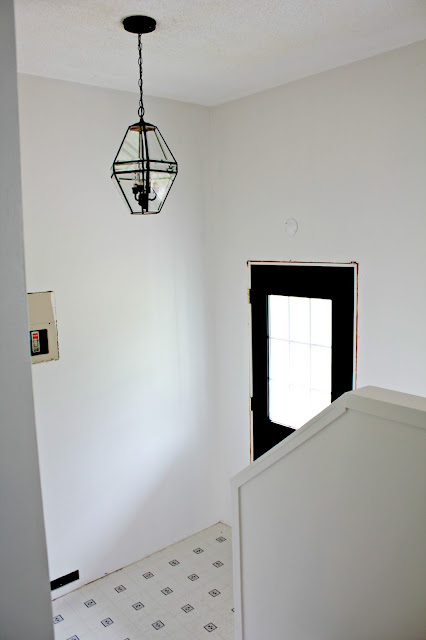 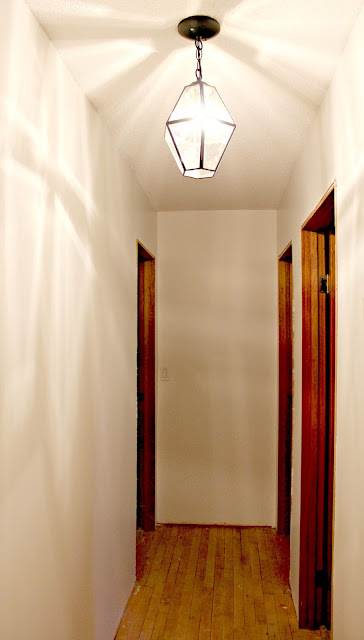 HA! Tricked you ladies, unfortunately this post is not about pop-up tents but about a discovery that only happens to people with blogs.  We found the original hardwood under the dirty old 70s' rug!! Whenever I read about some blogger or watched a DIY T.V. show about homeowners pulling back the carpets to find the original hardwood I thought WHO THE HELL does that really happen to?!?! Well this time it's me!!! Sorry to gloat but do you know how much money this saves us!? When we bought the house we knew there was the original school flooring in the main room but we didn't know it was hiding under the nasty carpet in the whole main floor!! Boo ya! 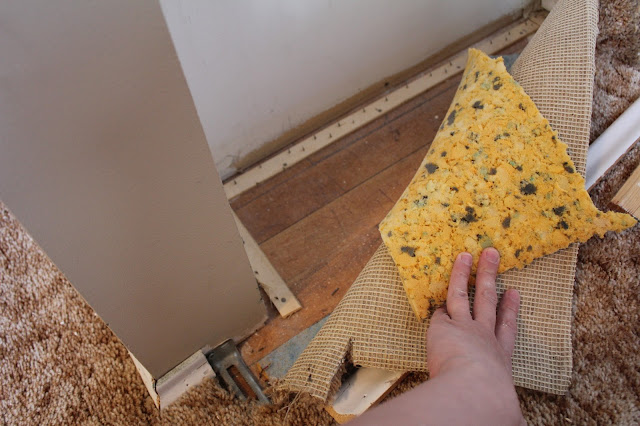 I'll tell you how the best day in my life happened...I was painting the ceiling in the spare room when I happened to look down and saw a little piece of brown peeking at me through the closet door floor hardware.  I immediately got down on my knees and started peeling up the carpet in the closet.  It was wood........a lot of enthusiastic screaming followed by Mr.Loonie asking WTF was going on. He couldn't believe it either! We then went to every bedroom closet to reveal more glorious wood!! 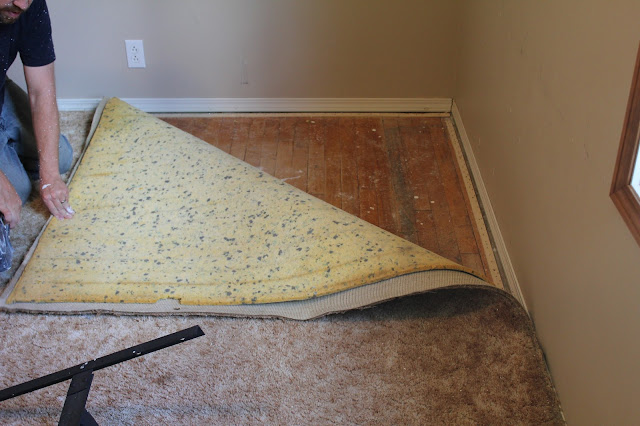 Now the wood is not in pristine condition so it will need to be refinished, I'm not sure yet how much this will cost us but I know it is a heck of a lot less than new hardwood!
The carpet is now serving as a drop cloth when painting the walls and ceiling.  As painting is completed in each room we are removing the carpet and painstakingly removing the nails and staples and washing dripped stucco and years of dust. There are paint and other stains remaining but should be easily sanded out in the refinishing process.  Time to start calling specialists for quotes!

Pictures below are taken in Penny's Room. 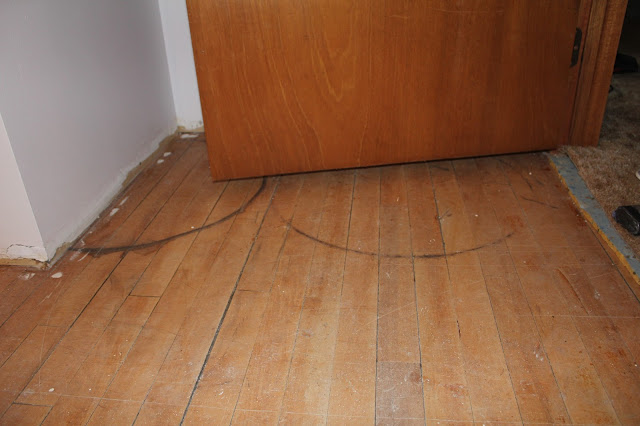 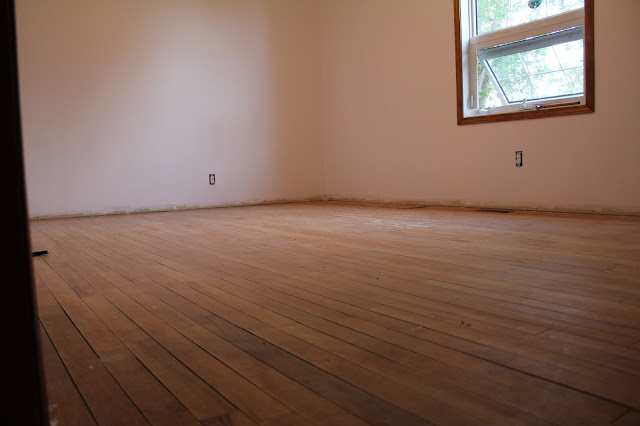 My friend introduced me to the Habitat for Humanity Restores in the Edmonton area and now Mr.Loonie and I are obsessed.  The jist of how it works is people drop off their unwanted home decor items such as furniture and lighting and also home renovation material like doors, tile, toilets, you name it.  It was pretty amazing actually, we know it will be our first stop when thinking of replacing anything in our house.  They literally have hundreds of interior doors that are in awesome condition.  Anyways....the point of this post is the awesome lantern style pendants I found for $15 each for the two larger ones and $5 for the smaller.  A few days prior, I was browsing for a similar style light on the Home Depot website but they were all over $200! When I saw these lights hanging there in all their glory I was so excited, I had to have them. 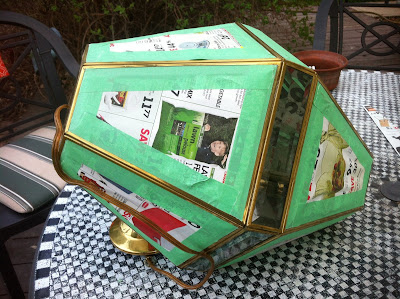 In between the time we moved out of our Fort McMurray house and into our new home, we were staying with my in-laws with not a lot to do so it was a perfect time to fart around on little projects such as this....tedious taping.  It's always awesome having extra help too. 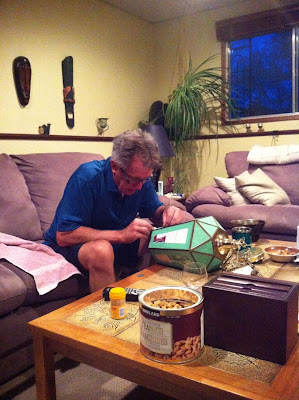 The plan was simple.  Tape off the inside windows (they were soldered in) and then spray paint black even the cord and the chain.I decided it was too difficult to paint inside the lights but the gold lines inside give kind of a vintagey shimmery look when hanging and light. On the largest one hanging in the entry I did paint the inside light pole by hand with black paint which were unlike the other 2 where the bulbs were flush with the top. 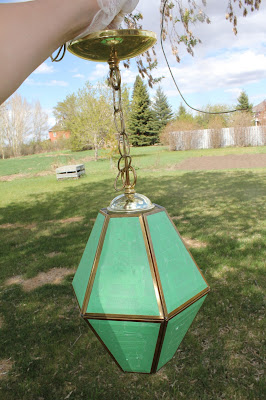 We were in the new house when it finally came time to spray. 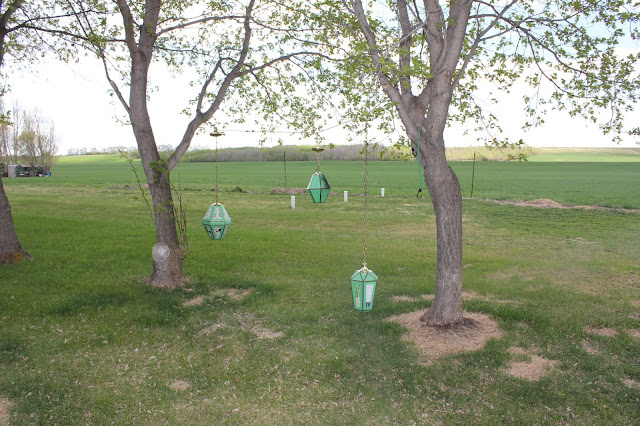 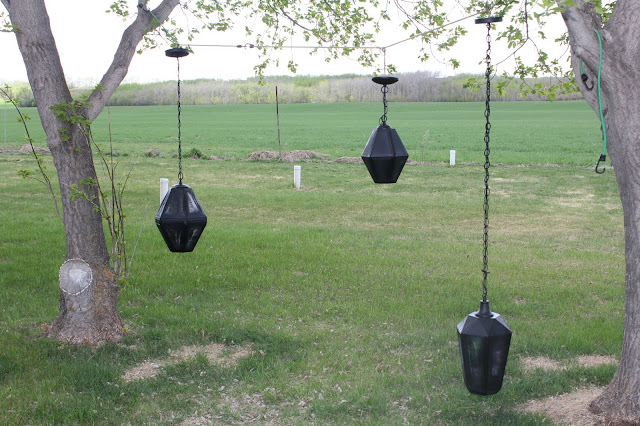 Remove the tape and hang.  We had to shorten in the chain in both the hall and entry. 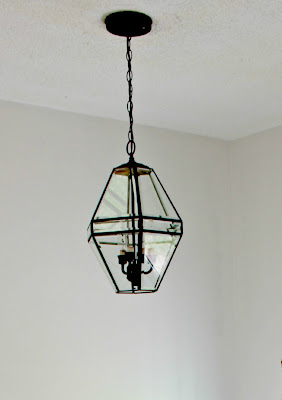 Please excuse the crappy picture but I don't want to give away the entry or hallway reveal, which will be coming soon!
Posted by Mrs.Loonie at 12:38 PM 17 comments:

You know what's one good thing about moving to a new city? Un-found geocaches! We were out of caches to find in Fort McMurray so we would have to patiently wait for a new one to be planted but not here! We have literally thousands in a 50 km radius and hundreds within only a few kilometers.  On Monday evening we started our hunt.  The picture below is from one of the caches we found (a mailbox screwed to a fallen log). We were asked to spell our team name using scrabble pieces included in the mailbox, pretty cool idea.  This picture was harder to get than you think, Penny wanted to eat the T....babies..... 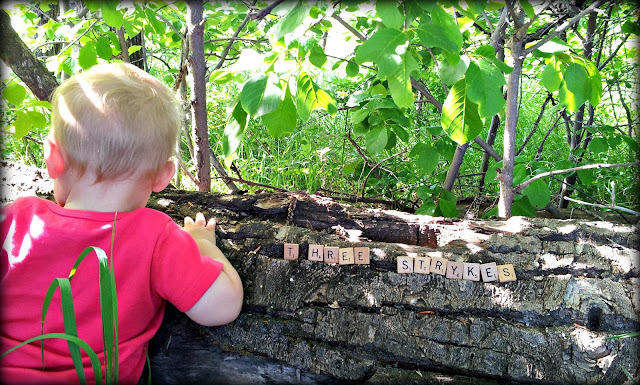 Email ThisBlogThis!Share to TwitterShare to FacebookShare to Pinterest
Labels: Geocaching 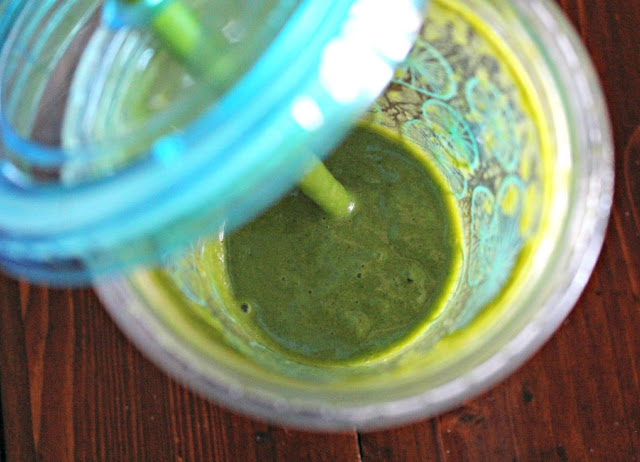 How do you make both mommy and baby happy? You hide yo green in there! I had to write it like that because I couldn't help but think of this old SNL skit....You put yo weed in there!  It came out just when I was at the age to think weed was hip and cool but I hadn't actually seen it really knew anything about it.  Fast forward to today.....

The BEFORE House Tour

Before I can start showing you all the progress we made I have to first set up the before situation.  The following pictures are from the listing so the owners had the place in clean selling condition but when we viewed the house it was everything but clean and orderly as it was occupied by renters for we're not sure how long.  There were toys, dishes, underwear(!) and dog mess everywhere, they obviously didn't give two shits if the house sold.  It was probably better for them if the house didn't sell so they didn't have to move out.  We did end up giving them some time because buying a house takes time!  We had a little bit of financial problems because of our Fort McMurray house not selling and it is not as easy to buy a house like it used to be with all the new CMHC rules.  We also had an inspection which got us a little worried resulting in us having a contractor come in to assess some of the issues brought up in the report.  Things turned out to be  not as bad as we expected just normal for an older home but we ended up negotiating for a small sum off the purchase price anyways.  We knew we would need new shingles this year since they in cupping and in generally rough shape and eventually we will have to replace the 20% of windows that are not updated but we ended up negotiating over a few things like attic insulation(we were told the R rating was higher than what was really there) and "Stryker's room", a little addition which was built on the ground without foundation - in the long term it could pull away from the house causing quite a bit of damage. 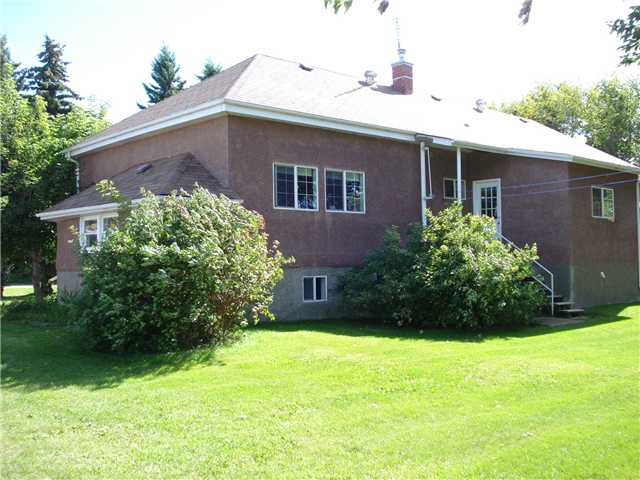 Back Exterior showing Stryker's room - the section of the house to the right jutting out from the house.

So that's it! Just like most listings the basement wasn't shown because of the horrific state it's in...kidding it's not that bad to the trained eye anyways.  It is just unfinished - in the main room just drywall, flooring and a drop ceiling is needed and the rest of it....well it could use a bit more! I will update pictures of the basement closer to when we decide to tackle it.

In the picture captions I included the very basic plan of what is needed to be done but like every reno there is quite a bit more to it.  Let the projects begin!